As a professional photojournalist I feel I can capture a picture of anything. Beginning in physics lab in the 60’s when I used sheet film in a lens-less press camera to capture laser patterns and extending through many assignments I’d always gotten my picture but owning a Bouvier des Flandres kennel proved a real challenge.

These Belgian/French war and farm dogs (“The Dog of Flanders” [famous book], was a Bouvier) and the Germans put a bounty on the head of the dogs because they were so effective in carrying messages in war zones. (The fact that they tended to kill and eat the German Shepherd couriers may have contributed to the German prejudice.)

In any case there were very few of them left after the two world wars and we felt fortunate to live with 13 of them, especially when we moved from the old 13-room country inn to our 30 acre rescue operation/ranch.

By that time we had stopped breeding because it became so difficult to find owners smart enough to trust with a Bouvier. These are wonderful, easily trained and very obedient dogs, but untrained they are like having a live hand grenade. I recall the next to the last buyer flew in via private plane it was so hard to find a good Bouvier – them we trusted, but the last potential buyer was a school teacher from Pittsburgh, 90 miles away.

Three hours later she called saying she was in Johnstown (40 miles away to the south). It turned out that she didn’t like my directions so she made up her own – she obviously thought that only living there, I didn’t know where I was located.

Are You Smart Enough To Own A Bouvier?

But love them as I did as great personal protection dogs as well as wonderful cattle and sheep dogs – one buyer told me the one she had lost due to old age had head butted a bull which was threatening her 8 year-old – and Bouvier was the White House dog during the Reagan administration – you’ve probably never seen a picture of that dog or of most Bouviers and the accompanying photo of my 140 lb Donnie should make the reason clear – this dog is properly trimmed because they prefer lying in the snow watching their sheep charges. 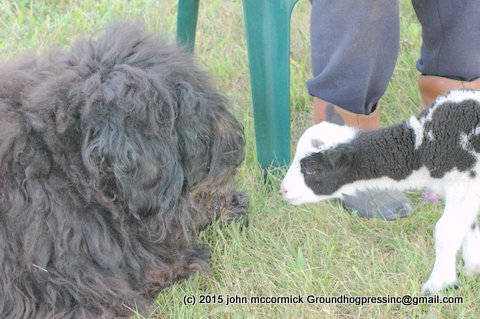